Welcome to the Home pages of our Hawaii Sakura Foundation!  Responding to the long-time desire of Hawaii’s residents to have genuine Japanese flowering cherry trees bloom in Hawaii, our Foundation has been established in 2018, succeeding the Hawaii Cherry Alley Committee that had initiated this highly ambitious and challenging attempt. Introduction of essentially temperate Japanese flowering cherry species into subtropical Hawaii is a very difficult task, and similar trials in the past all failed as the results of which the cherries flowering in Hawaii to date are only a Taiwan cherry. But, we dare to tuckle this, coping a number of problems as will be mentioned below. Now that those Japanese flowering cherry trees, which have been brought into Hawaii in 2011 on the occasion of the Cenntennial Celebration of Japanese Flowering Cherries that were presented to the United States in 1912 as the symbol of friendship and amity between the U. S. and Japan, have begun flowering, Hawaii State has given the Committee the status of legal incorporation and hence the Hawaii Sakura Foundation. We should, therefore, highly appreciate your kind help to and interest in the venture of our Foundation, which will realize the Sakura Matsuri under fully blooming Japanese flowering cherry trees.

Thank you very much,
The Board of Directors of Hawaii Sakura Foundation

The Board of Directors 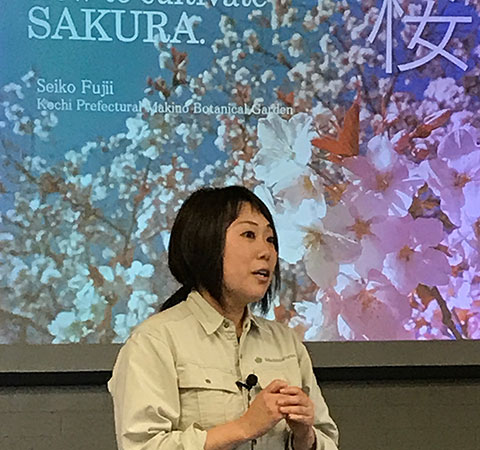 In December 2017, the first official event of the Hawaii Sakura Foundation was the invitation of Ms. Seiko Fujii, a “Sakura-mori” (sakura care specialist) to Hawai‘i. The Foundation asked her to examine all of the trees and to prune them so they would grow into umbrella-like alley tree shapes as opposed to typical bush shapes. Ms. Fujii gave seminars on how to care for sakura trees at Honbushin International Center in Mililani on O‘ahu and at the University of Hawai‘i at Hilo on the Big Island.

The Foundation’s next big event for 2018 will be the Exhibition of Botanical Arts of Sakura flowers from the main islands of Japan, as well as Okinawa. During the exhibition, two foremost botanical artists from Japan will teach botanical art and Dr. Koyama will give talk on the botanical arts and illustration.
In 2020, we plan to present a photo exhibition of famous Sakura parks and alleys found all over the world. The exhibition will feature the Chinese Wuhan Sakura Park, where 10,000 various Japanese flowering sakura trees flower every year; the splendid Sakura Alley in Berlin, Germany; the Potomac River Sakura Alley in Washington, D.C. and more.

From its early beginnings, Dr. Tetsuo Koyama, Russell Kokubun and a few of their staff members worked on the project using their own resources and finances. This two-man crew, fondly known as “Koyama-Kokubun three-legtace,” did everything from collecting and preparing the seeds, shipping them, germinating them and growing them into young trees of planting size.
After the ceremonial planting of the sakura trees in Church Row Park in Waimea on the Big Island, there were some 400 good young trees still left. In order to plant those young trees throughout the Big Island and O‘ahu, the Hawaii Cherry Alley Committee was formed. Russell Kokubun, as chairman, led this committee of six people. After the committee was formed, Tony Group Autoplex helped subsidize partial office expenses by providing secretarial help. Koyama’s wife, Vivian, tirelessly documented the Committee’s events and the progress of the trees by taking photographs. Even after the Committee was formed, up until today, members serve on a volunteer basis because they are passionate about sharing their love of sakura with others.
Today, Hawaii Sakura Foundation is a 501(c)(3), a tax-exempt organization, that relies solely on donations. One of its major corporate sponsors continues to be Tony Group Autoplex.
Other corporations and organizations provide financial support for individual events.

If the idea of bringing sakura trees to Hawai‘i is something you are interested in, we kindly ask for your support. Contributions may be sent to: